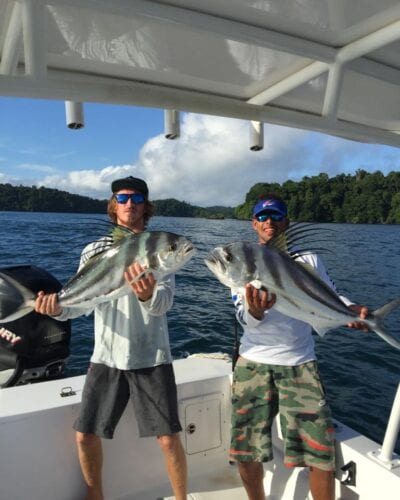 The rooster fish in Panama has distinctive high, comb-like dorsal fin of a lit-up roosterfish cutting through green inshore waters, hot on the trail of live bait or popper, is one of the most memorable sights in all of sport fishing. Roosters are unique to the eastern Pacific, where they are caught from Baja into northern South America.

The roosterfish gets its name from the giant, distinctive dorsal fin on the top of their powerful bodies. The tall, comb-like fin is distinctive and easily spotted when the fish breaks the surface on the hunt for baitfish.

The Pacific coast of Panama is famous for catching rooster fishing all year around. Our favorite spots for Panama Roosterfish is IslaPradia and Isla Secas all located within  30 mins from our resort.

Roosterfish typically feeds close to the shore, sometimes almost beaching itself as it chases bait fish in the surf. Roosterfish follow schools of baitfish, so knowing where they will help in finding the roosterfish.

Roosterfish They often migrate up and down coastlines, sometimes for hundreds of miles and can completely disappear from areas that were filled with them a short time ago. Roosterfish are great for light tackle anglers because they max out around 100 pounds, and average around 60 pounds. They fight hard like all the members of the jack family, but they don’t run for the cover of rocks once hooked.

Best Fishing methods in Panama is live bait, slow trolling with blue runners will get one for sure. The fish will play with the bait for a while, so you must be patient and make sure they have taken the whole bait before setting the hook. They will take poppers from time to time, however, the fish somethings will just follow it then turn away without striking. Lures that skip on the surface are tempting to a roosterfish when they are acting aggressively.

They do, however, certainly fight with jack-like stubbornness and power but add to that fight the ability to jump, which further explains their appeal as game fish.